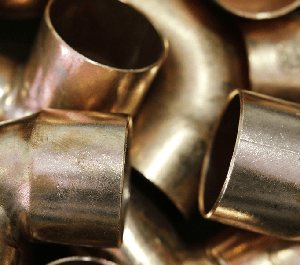 The use of copper in hospital rooms, may reduce cross-infection, a common concern in cystic fibrosis centers.

Using copper on high-touch surfaces in hospitals may reduce Hospital-Acquired-Infections, according to a report published in the American Journal of Infection Control.

…on average, fixtures in copper-equipped rooms had concentrations of bacteria about 98 percent lower than in rooms furnished with traditional equipment, whether the rooms were occupied or not. On half of the copper components, the researchers were unable to grow any bacteria at all.

Copper’s potential to help fight infections was also reported on in 2013 in The Hospitalist, How Copper Could Solve Problem of Hospital-Acquired Infections, and this article in Applied and Environmental Microbiology entitled, Metallic Copper as an Antimicrobial Surface. Amazingly the latter article cites an Egyptian medical text from more than 4000 years ago that describes using copper to sterilize chest wounds and drinking water.

Given the cross-infection concerns at CF Centers and among people with CF who are often regularly hospitalized, the use of copper in hospital rooms and staff lounges seems like a good idea.

366 February 10, 2016
CysticFibrosis.com is one of the world's largest social media networks dedicated exclusively to the cystic fibrosis community. In addition to the forums, the site contains information on clinical trials, gene therapy, testing, associations, research and events. Read our website disclaimer.