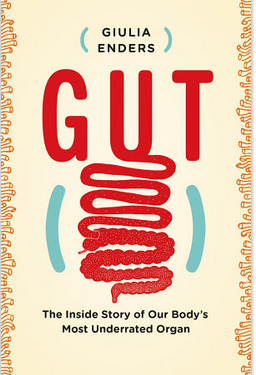 Cystic Fibrosis symptoms manifest in many ways, including gastrointestinal problems. Over the years, CysticFibrosis.com member and moderator LittleLab4CF has helped many people with GI problems in the forums and through private messages. His insight and advice come from years of personal experience with GI disease and from being a scientist. Below are some of his thoughts on Fecal Microbiota Transplants and the book “Gut: The Inside Story of our Body’s Most Underrated Organ” by Guilia Enders.

“This last year I did some investigation into the latest techniques for helping the dysfunctional gut. A new book is out, “Gut” by Giulia Enders, which explains fecal bacteria transplants. I recommend the book for anybody who wants to get the straight poop on pro-biotics, pre-biotics, gluten, FODMAPs (Fermentable Oligo-Di-Monosaccharides and Polyols), and, how all of it works together, or not.

It is an easy and entertaining read by a young author who is wise beyond her years. Enders talks about this topic with authority and accuracy, and dispels a number of gastro-myths. She clarifies why we avoid fermentable sugars–we lack single enzymes to digest things like fructose, and she explains why certain people are impacted by gluten. And she doesn’t go stupid with gluten = glue and other folk medicine mythology.

Bacteria, yeasts, molds and viruses are like bad neighbors, constantly fighting for territory, foods and resources. Like the parasites that attack the brain of certain ants, our gut bacteria can make us consume foods that we otherwise would avoid or at least not crave. It’s true!

It is also true with a fecal microbial transplantation (FMT). FMT has an inherent flaw. If we were to take a bunch of probiotic bacteria via oral capsules, it would be virtually no different from inoculating the bowel via enema.

Unless there is food to sustain the particular transplanted gut flora, it will just die off or be overtaken by bacteria that does get foodstuffs from what you eat and drink.

If you want to sustain poo bacteria and other probiotic microbes, you are going to need to feed them. Like owning a salt water aquarium in the desert, unless you import the minerals, foods and symbiotic life forms, you’re going to have a dead ecosystem in a lovely glass cage.

People with weakened immunity and CFers who have dysfunctional organs in the gut and frequent antibiotic treatments are especially vulnerable to gut bacteria problems. Antibiotics at best kill off pathogens, but they also kill off probiotics, creating an imbalance in the gut.

Not to be underestimated, our gut is the center of our immune system and frankly relies on gut flora to keep infections at bay.

It is unfortunate to need oral antibiotics and be subjected to an induced imbalance in probiotic bugs. Antibiotics typically target a family of bacteria, and the more “broad spectrum” they are, the worse the short term interruption in the balance of helpful gut flora. Our gut flora isn’t just bacteria. It is also molds and yeasts and viruses. But antibiotics rarely wipe out molds and yeasts, and never viruses – hence the imbalance. So after taking multiple antibiotics, you are left with what? No bacteria, and loads of molds, yeasts and viruses that don’t make for a healthy gut.

FMT therapy has been lifesaving in many cases, but it needs to be better understood – how to optimize it and how to avoid unintended consequences.

If you want to have FMT therapy work, ask a bunch of questions beginning with the precise needs of the microbes you want to keep alive in your gut. I promise you, if they aren’t nurtured and kept alive and happy, they will be an uncomfortable waste of waste.

If you are feeding competing microbes, the FMT and oral probiotics will be killed and washed away.

FMTs need a certain pH or acidity/alkalinity balance to survive. They need certain foods, and I’m not talking potatoes, but metabolites or the digested remains of foods, potentially very specialized foods. I honestly believe this balance is going to be very difficult to achieve, but you will learn a great deal about what makes your gut healthy by trying.

Taking live cultures like homemade sauerkraut, yogurt, sour cream and, of course, live cultures of probiotics may be a better alternative in the final analysis. Live cultures within the foods make for a near perfect means of propagating a gut filled with both probiotic organisms and the very foods that sustain them.

Poo biotics, as far as I have seen and researched, don’t come with a list of how to feed and care them. I’ve grown my own poo bacteria and identified them. Unfortunately, what I grow bacteria in isn’t the stuff of a Big Mac, beef bouillon, blood agar, agar-agar or other yucky stuff that don’t make it into the gut unchanged.

I would encourage you to do your homework with the people qualified to do FMT. If they can’t give you foods to eat that specifically culture what they are inoculating your bowels with, this could be a fool’s errand.

One final note, I would like to mention an interesting condition discussed in the book that I believe plagues many CFers: a neurological drive to empty the gut in people who have severe discomfort – a dystonia or manifestation of nerve disorder. If a person uses several doses a day of Miralax or another bulking laxative, they may want to consider the possibility that they suffer from this condition, and a bug may be at the heart of this drive to flush one’s system. You can learn more about this issue of partial-to-complete gut emptying in the book ‘Gut.’ “

Probiotics and Prebiotics in Food – benefits in the cystic fibrosis diet

436 June 30, 2016
CysticFibrosis.com is one of the world's largest social media networks dedicated exclusively to the cystic fibrosis community. In addition to the forums, the site contains information on clinical trials, gene therapy, testing, associations, research and events. Read our website disclaimer.