**Note: this is not medical advice and this method has not been approved by any medical professionals or suppliers. It is just a workaround method used by someone with CF. It should only be tried on nebulizer parts that can be boiled**

I have a confession: I never used to sterilize my nebulizer “handsets” (you know, the parts which holds the medication and attached to the mouthpiece). Up until I was in my late 20s I didn’t even know we were supposed to! I actually learnt about the need to daily disinfect these on cysticfibrosis.com’s forum about 10 years ago, because CF lungs get colonized with bacteria which is extremely hard to get rid of. I promptly went out and bought an inexpensive microwaveable baby bottle sterilizer which served me well for a number of years. I felt satisfied that I was adequately nuking the Pseudomonas out of my nebs.

However I have since upgraded to a few different hard reusable handsets, including some that have metal parts like the eRapid (also known as the eFlow or Altera which refer to the different aerosol heads designed for separate medications – the overall concept is the same, they need to be disinfected). If you know anything about microwave ovens, you know that you CANNOT heat metal inside it so my baby bottle sterilizer was a no-go.

Now first, a big disclaimer to say that I’m by no means an expert on disinfecting medical equipment. There is some manufacturer documentation out there regarding disinfecting nebulizers correctly…and some of it is confusing. I am still uncertain if soaking the parts in the type of disinfectant used in hospitals or for sterilizing baby bottles is adequate, and if it may actually damage some components? The manufacturers say that the nebulizer part may be disinfected by boiling the parts in a clean pot of distilled water for a 5 minutes, daily. I don’t have access to an easy supply of distilled water so I was boiling them in regular water, stirring my neb-soup in order to avoid any melting-accidents.

The problem, of course, was that this was a pain and I didn’t keep it up. I needed a different solution, so started investigating electric baby bottle sterilizers. A few years ago they were outside my price range and they are also very large. Some recent research has shown they have come down in price, $40-$100 and the frequently-recommended wabi baby sterilizer is $169. However they are still big as they can fit about 6 baby bottles.

I wanted something smaller that I can take with me when I travel, with an auto off-switch. Medical equipment suppliers manufacturers, if you’re reading this: Please design something like this! Disinfecting our nebulizers should be part of the product line.

So anyway, since steam sterilizers already exist (and steam is distilled water, yes?) I decided that I needed steam in a sealed enclosure, for 5-10 minutes. And my solution was a small, inexpensive electric egg cooker which cost under $20:

How they work is you fill the bottom area up with water from the little cup, put the lid on and it boils to create hot steam (which cooks the eggs…or the nebs) until the water has evaporated and then it either beeps or switches off. I use the water cup to fill it to the maximum allowed amount so that it steams for as long as possible. 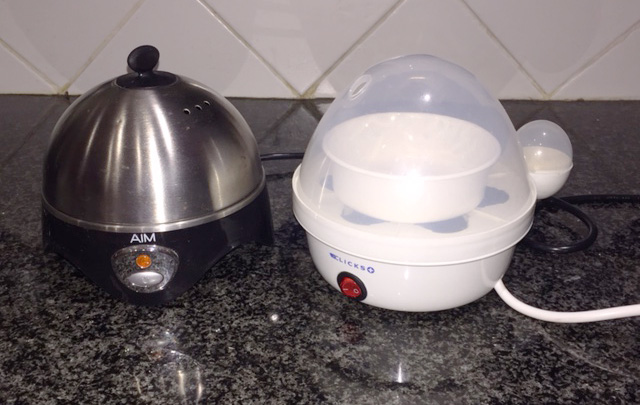 I actually have two: The silver one is great because it has an auto-off switch which I definitely recommend. The white one, however, can fit a mask as well as the lid is a little taller. It doesn’t have the auto-off so it was cheaper; and it’s fine to use if I’m standing in the kitchen doing something else so I can switch it off when it buzzes. I have stopped using the white one now because, one day I decided to make hard boiled eggs…so now I just use the silver one! But if I were buying a new one, I would try finding one with a larger lid like the white one that also switches off. 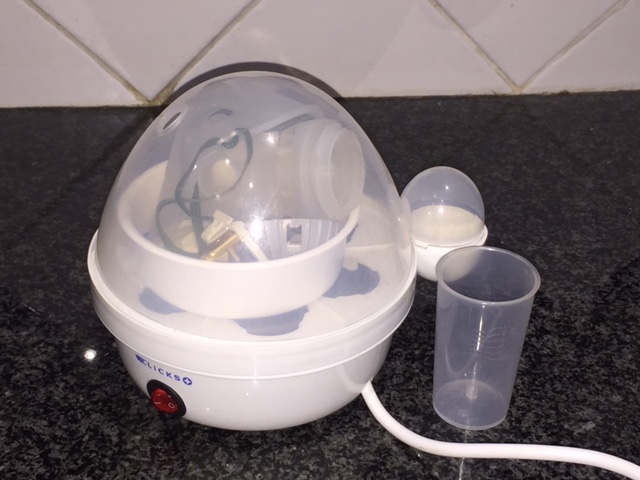 The main benefit of this method is adherence: it is much easier to do because it is effortless, and the devices are inexpensive and easily available. Note that after the unit has finished steaming, I let it cool down and then I remove the nebulizer parts to air-dry. Keeping it inside the boiler would not be a good idea due to the moisture build up. Some of the fancier baby bottle sterilizers have a built-in drying feature.

Have you found a good disinfecting routine or gadget? Or even a smaller sized baby bottle sterilizer that you can recommend? Let us know in the comments!

The brands I bought are not available in the US, however here are some similar ones from Amazon. They range in price from $17-$22

Fashion tips and favorite products for my Cystic Fibrosis body