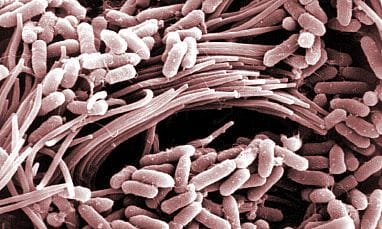 Cystic fibrosis is an inherited disorder that results in a buildup of thick and sticky mucus in the lungs, airways, and other organs. Excess mucus in the lungs can lead to coughing, breathing problems, scarring (fibrosis), and an increased risk of lung infections. The disorder affects about 30,000 people in the U.S. and 70,000 worldwide. There is no cure, but treatments can improve both the length and quality of life for people with the disease.

Cystic fibrosis is caused by mutations in the gene that encodes the cystic fibrosis transmembrane conductance regulator (CFTR). This protein functions as a channel across the membrane of cells that produce mucus, sweat, saliva, tears, and digestive enzymes. After the discovery linking the gene to the disease, scientists produced mice with a disrupted Cftr gene (CF mice). Surprisingly, the animals’ airways didn’t develop the bacterial infections typical of cystic fibrosis. The reasons why were a mystery.

To gain insights into the molecular basis for respiratory infections in people with cystic fibrosis, an NIH-funded group at the University of Iowa examined why CF mice don’t develop airway infections. The investigation, led by Viral Shah and Dr. Michael Welsh, was published on January 29, 2016, in Science.

One function of CFTR is to secrete bicarbonate, which has a high pH, into the liquid on the surface of airways, where respiratory infections begin. Loss of this activity leads to a more acidic airway surface in humans. Thus, the team first compared differences between the pH of airway surface liquid in mice and humans. They also studied CF pigs, which develop airway disease similar to humans with cystic fibrosis. Experiments suggested that pigs and humans have a mechanism to acidify airway surface liquid that is either absent or less efficient in mice.

The scientists assessed several candidate transporters to determine which makes pig airways acidic. Gene expression levels for ATP12A were abundant in the airways of pigs and humans, but very low in mouse airways. In several sets of experiments, the team showed that ATP12A activity is likely responsible for creating an acid environment that impairs airway defense in pigs and humans with cystic fibrosis.

Your Questions on Nutraceuticals

302 October 5, 2016
CysticFibrosis.com is one of the world's largest social media networks dedicated exclusively to the cystic fibrosis community. In addition to the forums, the site contains information on clinical trials, gene therapy, testing, associations, research and events. Read our website disclaimer.