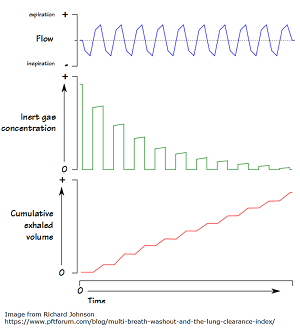 A new phase 3 study, led by The Hospital for Sick Children at the University of Toronto, Canada, has been completed on the CF treatment ivacaftor/lumacaftor in children ages 6-11 with two F508-del CFTR mutations.

In a group of 206 children from 54 hospitals in 9 countries, half were given ivacaftor/lumacaftor and the other half a placebo for 24 weeks.

The results, published this week in the Lancet Respiratory Medicine Journal, show that the children on the combination drug had improved Lung Clearance Index (LCI) within 15 days of treatment, and that the improvement was sustained: “the average absolute change in LCI2·5 from baseline over all study visits up to and including the week 24 visit, least squares mean difference was −1·09 units (95% CI −1·43 to −0·75, p<0·0001) for lumacaftor and ivacaftor versus placebo.”

About the Lung Clearance Index (LCI). From a research paper in the journal Thorax:

The Lung Clearance Index (LCI) detects changes in the smaller airways and at the beginning stages of lung damage. explains the rationale for using LCI in addition to FEV1 in some clinical trials. Here is an excerpt from the paper:

“In early disease, FEV1 reflects total airways resistance and is insensitive to changes in small airways, which contribute <10% of the overall resistance in healthy adult subjects. Significant structural airway damage can be demonstrated on CT scanning in the presence of a normal FEV1.

While FEV1 is the currently accepted gold standard to monitor trials of new treatments for CF, the rate of decline in this parameter has steadily reduced over the last decade. Power calculations show that many hundreds of patients would need to be treated over a year or more to see any beneficial effect of a novel therapeutic agent aimed at the basic defect. We have therefore instituted a large programme to assess novel biomarkers which could act as surrogates for FEV1.

Ventilation heterogeneity is thought to be altered by small airways dysfunction, and measurements of this should therefore reflect the earliest pathology in CF—as has already been shown in children. This is also the region of the lungs which is likely to be a key target for gene therapy. The choice of which subject to recruit into trials of gene therapy represents a conflict between those with sufficiently clear airways that the gene therapy complex can be delivered into the lungs and those with sufficient abnormality in lung function so that any improvement can be measured. LCI offers the ability to measure dysfunction in the airways of interest, and also to extend the range of patients suitable for these assessments.”

How is LCI measured? From Science Direct:

“LCI is derived from Multiple Breath Washout (MBW) tests. The basic principles behind MBW are relatively simple, and were first described more than 50 years ago. The test involves following the washout of an inert tracer gas from the lungs during relaxed tidal breathing. In other words, LCI represents a measure of the number of times the volume of gas in the lung at the start of the washout (the FRC) must be turned over in order to wash out the tracer to the pre-defined endpoint. With increasing disease severity, LCI increases.”

The image below offers a visual representation of LCI. From the PFT Blog. 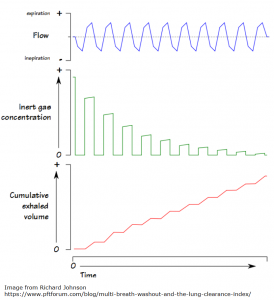 This study from the American Journal of Respirator and Critical Care Medicine looks at the relationship between LCI, FEV1, and markers of lung damage on high resolution CT Scan (HRCT) in two diseases: Cystic Fibrosis and Primary Ciliary Dyskinesia. In doing so, the article summarizes many interesting findings about the progression of CF lung disease.

791 March 13, 2017
CysticFibrosis.com is one of the world's largest social media networks dedicated exclusively to the cystic fibrosis community. In addition to the forums, the site contains information on clinical trials, gene therapy, testing, associations, research and events. Read our website disclaimer.