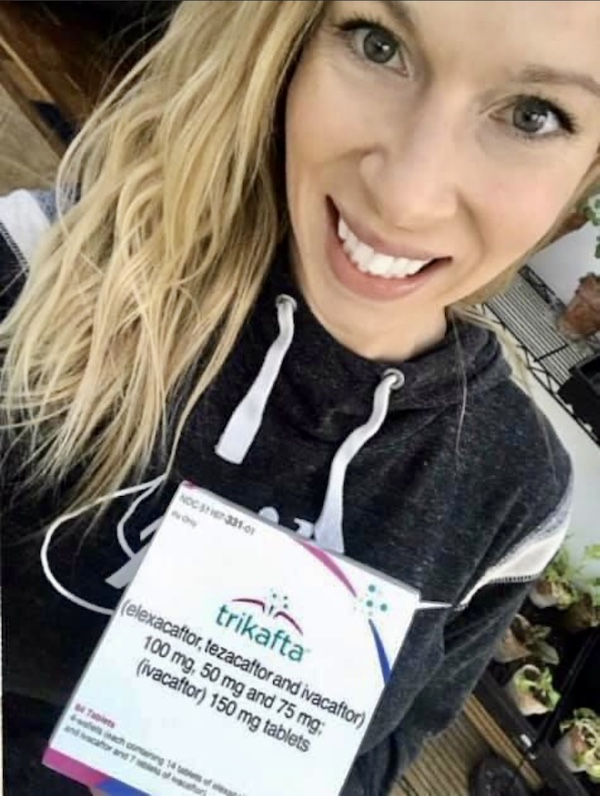 “She might make it to 18 years old if she is lucky.”  This is what the doctor told my parents after finally receiving a diagnosis for my failure to thrive as a baby. At 6 months old I only weighed eleven pounds and my mom just had a gut feeling something wasn’t right. After several tests, trips to specialists and a lot of worry, I was diagnosed with Cystic Fibrosis at eight months old.  My parents were devastated. They didn’t know much about CF before my diagnosis, only that it was pretty much a death sentence for their little girl, but they quickly became experts.

My mom spent countless hours at OSF in Peoria, Illinois with me the first couple years of my life subjecting me to all kinds of medical treatments to ensure that I was as healthy as I could possibly be. My dad worked two jobs to support the cost of medical bills as well as day-to-day living. My brother, five years my senior, was a handful so my parents were in over their heads with stress.

As I got older my Cystic Fibrosis seemed to plateau. I coughed sometimes and got sick from time to time, but I honestly felt like a normal child. I was active and healthy and could do everything my friends could do. Aside from having to explain to other kids why I took pills every time I ate, CF didn’t really impact my young life. I did my normal doctor visits four times a year and the doctors always considered me a “healthy CFer”. I even remember when I was about eight years old, my doctor told my mom with advancements in treatments and technology he thought I could live to see 70 someday. However, even at a young age, hearing that didn’t make me feel optimistic. The life expectancy at that time was about 30-35 years old and I knew that. I thought, “There is just no way I will double that.”

Fast forward about 10 years and around the time I graduated high school I could feel my health changing. As a teenager I wasn’t as vigilant about always doing my nebulizers and treatments, much to my mom’s frustration, and I could feel it starting to backfire on me. I was coughing more than usual, bringing up more mucus, found I had less energy and with each clinic visit my once 95% PFTs were slowly declining into the 70s. From a young age I knew I always wanted to be a mother and I saw that dream going down the drain. How could I conceive, which I knew was harder for women with CF, let alone take care of a baby like this? How could I bring a child into this world knowing it won’t have its mother very long?

I had a steady boyfriend but had given up any hope of ever having children. Despite that, I had always been told that because of thick mucus, conception was nearly impossible for women with CF, so neither of us was very careful. On August 5, 2007, shortly after moving in together, my boyfriend and I found out that it was not in fact impossible for me to conceive. I was elated at the dream of being a mother coming true, but I also felt a lot of fear and guilt. I did not want my young child to have to go through the pain of their mother dying. I went through with the pregnancy and on April 1, 2008 my beautiful baby boy was born.

Being a new mom was life-changing for me. I was only 20 and I had to grow up quickly. I wanted what was best for him and I made sure that I was doing all of my nebulizers and taking care of myself the best I could along with taking care of a newborn. Many days were challenging but I found that, while my PFTs were not really increasing, they were no longer decreasing. I was stable for a while and it gave me the motivation to keep pushing forward.  I loved being a mother so much that we decided to try for one more. We spent two years trying with no luck. I was discouraged and ready to give up.

Around this same time, my doctors had called me with some amazing news. A new breakthrough CF treatment had just been approved by the FDA and by some stroke of luck, I had the two genes that it was created for. Out of about 30,000 people with CF they said, I was one of around 1200 who would have access to this life-changing drug called Kalydeco. I couldn’t believe it. I hadn’t heard anything about it and now they were running my approval through insurance and I should have it in a couple weeks. In May 2012, I started taking Kalydeco and within a few days my health changed drastically. I was no longer coughing or short of breath. I felt normal, like 10-year-old me again. Over the next couple of months my PFTs went from 78% to 111%. Yes you read that right. This new lease on life gave me the encouragement to keep trying for baby #2.  In November 2012, after almost three years of trying and only a few days away from trying our first round of IVF, I found out I was pregnant. My doctor gave all the credit to Kalydeco. She said my mucus had thinned drastically and looked normal. Nine months later my first daughter was born.

Life was bliss for a couple of years. I loved being a mommy of two and I got to stay home with them which was even better. I began working out and weight lifting and my health felt amazing. I had stopped doing my nebulizers for the most part. After years of being hooked up to machines, I felt healthy enough to stop doing them and just enjoy life. For a while my PFTs never faltered and the medicine continued to work. Then in 2015, after a rocky relationship, my husband and I filed for divorce.

The relief of no longer being in a toxic relationship was freeing but knowing that I would have to give up time with my kids to see their dad now was so stressful. I also had to go back to work and begin to support myself after years of being a stay-at-home mom. Not too long after the split, I noticed the coughing was back. It snuck up on me at first and then hit me like a bus. I was coughing up mucus again and sometimes blood. I contributed to the stress of divorce and being a single mom, but in the back of my mind I felt like Kalydeco just wasn’t doing its job anymore. My PFTs began to decline again into the 80s. I still continued to take Kalydeco but I was worried for my future.

However, I persevered and a few months after my divorce, I met my now fiance. This new relationship was bliss. Completely different from my old  one and I was so happy to have found someone so amazing. Once he met my kids, he jumped right into the role of stepdad headfirst despite having no experience with kids. I had long ago decided I was no longer having anymore kids, but he wanted one of his own so after a couple of years of dating we started trying. My third and final daughter was born on October 9, 2019 and just a few days later I got the call that my insurance had approved me for Trikafta. My doctors assured me that this was a miracle drug, approved for about 90% of the CF community with radical changes in lung funcion and overall health.

I took my first dose of Trikafta the day before Thanksgiving that year. I had two days of what I call a “clear out” phase and since then I have only coughed up mucus a handful of times. This November will be three years on Trikafta for me. Three years of knowing that I have drastically high chances of living a normal life expectancy. I no longer do nebulizers. My enzyme dosage has decreased. In the off chance I eat and forget my enzymes I no longer worry about being painfully sick for days. I can keep up with my kids now when they want to play tag or go swimming or play ball. Trikafta has been a blessing for me. I haven’t felt as good as I do now since I was a little girl. My anxiety over dying early and leaving my kids without a mother is a thing of the past.

As a mother now, I can imagine the pain my parents felt hearing an 18 year life expectancy when I was diagnosed. When you have children you never expect that they will be born with a chronic illness and when it happens it is devastating. I have seen both of my parents cry tears of happiness knowing that I made it. I made it to 18 and I continue to make it further everyday. My parents worked so hard to make sure that I was active and healthy when I was young so that I could have the best possible chances at survival. Without them I may never had made it to Trikafta. I have them to thank above all else, but also the researchers and the donors to the CF foundation for their continuous work in trying to find a cure.

I have watched the lives of so many friends on social media transform since Trikafta. I’ve witnessed so many “infertile” women now being blessed with motherhood. I have watched people come off oxygen, gain weight without trying, run again without getting short of breath. It is truly miraculous and all thanks to two little orange pills in the morning and one little blue pill at night.

It’s a Marathon Not a Sprint - by Nicholas Breton

Trikafta, The Equalizer - by Ron Bartell

21 September 30, 2022
CysticFibrosis.com is one of the world's largest social media networks dedicated exclusively to the cystic fibrosis community. In addition to the forums, the site contains information on clinical trials, gene therapy, testing, associations, research and events. Read our website disclaimer.

Surviving Through the Pandemic Isolation in Ireland with CF