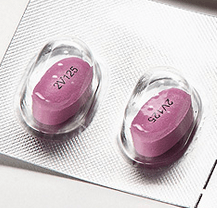 At the end of November, the results of a clinical trial of Lumacaftor/Ivacaftor, also known as Orkambi, in CF patients with one F508Del mutation were published in the Annals of the American Thoracic Society.

A past trial for Orkambi in this type of CF patient (heterozygous F508del) lasted 28 days and showed that the treatment did not improve lung function. The more recent trial went on for 56 days and showed an improvement in respiratory symptoms but again not in FEV1% Predicted.

The patients were 18 years or older, with CF, and with an FEV1 of 40-90% of predicted. There were 126 patients at the start of the trial and 119 completed it; half were randomly assigned to received treatment and half received a placebo.

At the conclusion of the study, it was determined that:

Conclusions: Sweat chloride and respiratory symptom scores improved with lumacaftor/ivacaftor, though no meaningful benefit was seen in ppFEV1 and BMI in patients heterozygous for F508del-CFTR.