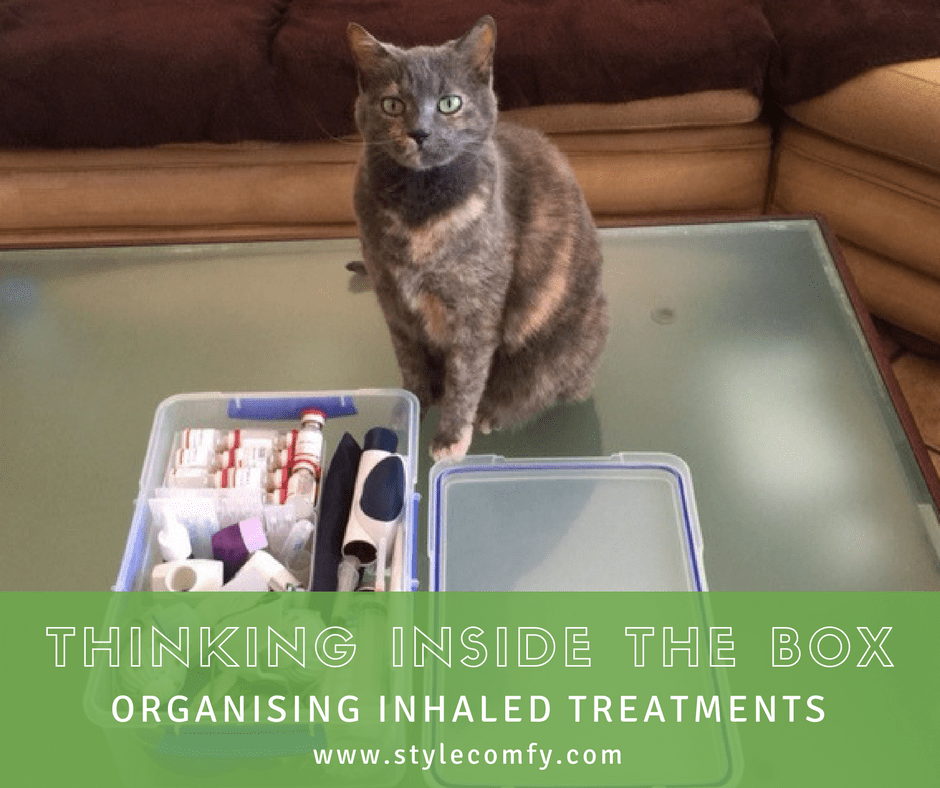 It’s taken me a long time, but I finally have a ‘system’ that has made inhaled treatments easier to keep up with.

Background
In childhood, I was very compliant with the CF treatments, as my parents helped me. I didn’t need to think about it; it just happened. In my late teens and twenties, I started slacking in what I assume was a normal rebellious phase along the lines of ‘Does this stuff even work?’ I switched to inhalers as needed and skipped anything I couldn’t feel a benefit from. I exercised actively during those years so I justified that I was doing a lot of ‘treatments’. I’m sure it helped, but of course it was no substitute and it would have been wise to add the exercise along with everything else and not instead. My doctors advised to stick to all the prescribed regimens including Nebuliser treatments! Physio! Twice a day! Forever!…And for the record, if I could go back in time I would do everything I can to stay healthy and limit lung damage. Just so we are clear: doing treatments to the best of your ability even though you feel healthy: smart. Slacking off because you can’t see the big picture: not smart.

Over the years and with some lung function decline, I have increased treatments from a few times a week to daily, but still battled to do them twice as day as prescribed. It felt like such a buzz kill, life was busy and having to accommodate seven extra sets of treatments a week when I already had my plate full with deadlines and tiredness and a hundred other things, felt impossible.

After routine IVs earlier this year I emerged feeling fantastic. This time I was going to keep it up and be 100% compliant. After a few days at home, it became harder to do the treatments again. It took so much willpower. My eflow was malfunctioning and only worked via the power cable so I had to sit next to a power outlet, or coax it into working with batteries. I always had to fetch random meds from everywhere in the house, and carry stuff from room to room and then tidy up afterwards. There was neb paraphernalia everywhere and it was getting to me. I needed a system or this was never going to work.

The right tools for the job
Previously, I had a slow compressor and my eflow was giving me hassles so I ordered a new eflow unit which works great, and with batteries. I have 8 good rechargeable batteries which I use on rotation.  Whatever type of nebuliser unit you prefer, I think it is worthwhile to spend money — even out of pocket if necessary — to upgrade, service, and replace the consumable parts regularly so your device works like it should. Having a frustrating device that takes too long, makes compliance even harder.

Storage solution
I used a large plastic box, a zipper pouch and some small containers to keep things organised inside the box. Everything related to the inhaled treatment category of my life lives in the box, excluding pulmozyme which lives in the fridge. Once a week I refill the box stash with enough meds for one week. The remaining stock gets stored in one cupboard. Some benefits:

Timing
I have found that I need to do my breathing treatments first thing in the morning, before anything else. The moment I get distracted with other activities, it is unlikely to happen. Some mornings, I grab my box-bag and head off to work, doing it en route or when I arrive at work BEFORE I start on anything. On a side note, doing treatments is one of those weird paradoxes…even though it takes energy and time, I feel much better and more energised afterwards and have more productive days. Skipping the evening treatment causes a horrible wake-up situation in the mornings, so I do my evening routine before it gets too late and I might be tempted to skip it. So in addition to the long term benefits, there are short-term benefits too.

I don’t know. Maybe everyone else has already figured this out and I’m late to the party. But this seemingly obvious solution has really helped me so I’d thought I share it. I don’t do the Vest because it’s not available where I live, so I just use airway clearance techniques along with the inhaled therapies. But I’d love to see a photo of your organising system (neb, vest or other) and hear your thoughts on compliance.

A bit about me: I’m a 38 year old woman with Cystic Fibrosis. I have a blog and website about having a chronic illness and juggling life.

“StyleComfy” is what want to be: On top of my game, in control of my destiny, with socks that match and my to-do list checked by 3pm. In reality, I mostly feel like I’m playing ping pong with three rackets while singing the alphabet backwards. Join me in the journey of Keeping it Together. Stuff I like: medical gadgets, napping, breathing, organising, having a career, colours, art and design. I also create printed items which can be bought in my online shop. Each design is available on several different items via Redbubble, so to see all items click a design in my portfolio at online store . I plan to create more CF-related designs soon…but current designs are in the shop or website linked above.

A few of the designs

225 October 31, 2022
CysticFibrosis.com is one of the world's largest social media networks dedicated exclusively to the cystic fibrosis community. In addition to the forums, the site contains information on clinical trials, gene therapy, testing, associations, research and events. Read our website disclaimer.