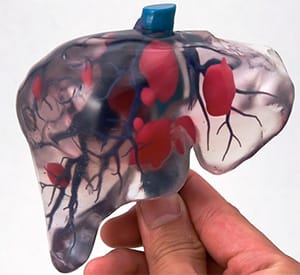 Home to the original bioprinting firm, Organovo, San Diego is, apparently, a hotbed of bioprinting activity.  Or, at the very least, the University of California, San Diego is make its own strides in the field of bioprinted liver tissue.  Published Feb 8 in the Proceedings of the National Academy of Sciences, UCSD engineers have detailed the 3D printing of a tissue that mimics the liver in terms of structure and function, paving the way for drug testing and medical research.

For its role in metabolizing drugs and producing important proteins, the liver is among the first organs to be pursued in the field of bioprinting.  Organovo has already begun selling liver tissue for drug testing, but still has a long way to go in terms of producing more complex liver structures. The UCSD team, however, has created a combination of different liver cells and supporting cells that have been 3D printed into a hexagonal structure.  Unlike previous attempts, this structure has access to blood supply, is made up of three different tissue types, and can be produced in just seconds.  And, most importantly, the result functions just how real liver cells would.

“We’ve engineered a functioning liver tissue that matches what you’d see under a microscope,” explains the study’s co-author Shu Chien, a professor of Medicine and Bioengineering, director of the Institute of Engineering in Medicine at UC San Diego and recipient of a National Medal of Science. “The liver is unique in that it receives a dual blood supply with different pressures and chemical constituents. Our model has the potential of reproducing this intricate blood supply system, thus providing unprecedented understanding of the complex coupling between circulation and metabolic functions of the liver in health and disease.”

The key to the team’s success is a unique bioprinting method created by Chen’s lab (covered by 3DPI in 2012).  While other bioprinting technologies may take hours to print cells, the lab’s technology can print a 3 × 3 millimeter square, 200 micrometers thick in mere seconds.  To do so, the team uses a two-step printing approach, first producing 900-micrometer-sized hexagons from liver cells derived from human induced pluripotent stem cells. Then, endothelial and mesenchymal supporting cells were printed between these hexagons.  As with other processes, the end structure is placed into an in vitro culture bath, in this case, for twenty days.

Upon culturing the structure, the team examined it for its ability to replicate liver functions, like albumin secretion and urea production.  Not only could the printed object perform these functions, but they could do so for a longer period of time than other liver models. On top of that, it can even produce an enzyme essential to metabolizing drugs.  Chien says, “The liver tissue constructed by this novel 3D printing technology will also be extremely useful in reproducing in vitro disease models such as hepatitis, cirrhosis, and cancer. Such realistic models will be invaluable for the study of the pathophysiology and metabolic abnormalities in these diseases and the efficacy of drug therapies.”

From the 3D Printing Industry

360 October 7, 2016
CysticFibrosis.com is one of the world's largest social media networks dedicated exclusively to the cystic fibrosis community. In addition to the forums, the site contains information on clinical trials, gene therapy, testing, associations, research and events. Read our website disclaimer.