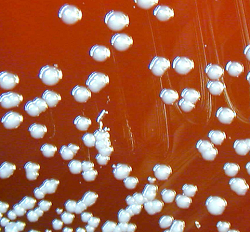 The article, The Lung Microbiome and Airway Disease, published September 2016 in the Annals of the American Thoracic Society, describes various research studies that analyzed the relationship between the lung microbiome and airway disease in Cystic Fibrosis. Scientists can now better examine microbial communities in the lungs, and they are looking at how the microbiome influences a person’s immune response and lung function.

When focusing on cystic fibrosis, scientists looked at age, genotype, lung function, and lung microbiota. Their results were published in this article: Airway Microbiota and Pathogen Abundance in Age-Stratified Cystic Fibrosis Patients.

It is important to note that scientists are moving toward understanding how the microbiome can predict health status, and how the microbiome may someday permit personalized treatments to correct and balance bacterial states in the lower airways.

Novel approaches that involve manipulation of microbial consortia, rather than destruction of the community structure may offer an alternative therapeutic approach for patient-tailored management of chronic airway disease. This concept is gaining increasing support [8], [63] and there is evidence for its efficacy, although the mechanism underlying these benefits remains unclear.

A recent pilot study of pediatric CF patients supplemented with a probiotic Lactobacillus species or placebo demonstrated that in addition to reduced gastrointestinal inflammation, patients who received the probiotic species exhibited a significant reduction in hospitalizations for pulmonary exacerbation [76].

Regarding genotype and bacterial community composition, scientists found that Double ΔF508 was associated with more Pseudomonadaceae species, but it is not known if this is the consequence of the lack of CFTR function or the types of treatments (e.g. antibiotics) used by people with two of this mutation.

A strong relationship between ΔF508 CFTR mutation and absence of multiple members of the Mycobacteriaceae, Staphylococcaceae, Enterobacteriaceae amongst others with a concomitant rise in abundance of members of the Pseudomonadaceae was identified in older CF patients with this genotype.

This suggests that mutations rendering the CFTR non-functional are associated with a loss of airway bacterial (including pathogen) diversity and outgrowth of a small group of phylogenetically-related species as these patients age. Whether this is directly related to the severity of the mutation and the creation of a distinct niche due to lack of functional CFTR or due to the treatments necessary to manage these patients (or a combination of both) is unclear.

While non-ΔF508 patients were associated with a relatively less severe pathogen profile.

This study, albeit small, demonstrates that homozygous-ΔF508 mutation is associated with the most substantial change in airway community structure and phylogeny in older patients.

In addition to genotype, age is also associated with less diversity of the lung microbiome and a loss of lung function.

In this patient cohort, loss of lung function in older patients was associated with a phylogenetic contraction within these communities and an expansion of the pulmonary pathogenic genera including Burkholderia and Pseudomonas.

The Lung Microbiome and Airway Disease

These data demonstrate that compared to younger CF patients, older individuals exhibit reduced airway bacterial diversity and assemblages of more closely-related organisms which occurs in parallel with age-related pulmonary function decline, implicating this structural shift in community composition in the pathophysiology of late stage CF airway disease. This has not previously been demonstrated in an age-stratified cohort spanning neonates to adults.

University of British Columbia studying B-cepacia with some success!

584 March 29, 2017
CysticFibrosis.com is one of the world's largest social media networks dedicated exclusively to the cystic fibrosis community. In addition to the forums, the site contains information on clinical trials, gene therapy, testing, associations, research and events. Read our website disclaimer.