Preston Campbell the CEO of the CFFoundation spoke first about the history of the Foundation but the next part was about deciding on the companies that could  begin the work of Precision Medicine.  This is a slide from his presentation 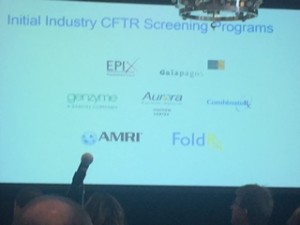 He spoke on April 26th at the Gaylord Hotel.

Here is a clip from his presentation.

Listen to how excited he and Bob Bell were when the found Aurora which would later become VERTEX: