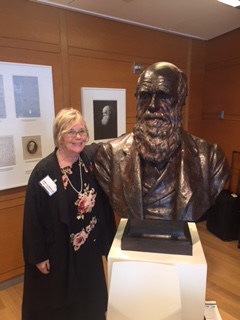 I was invited to speak at the PanagoraPharma Conference on Mobile Technology on June 28, 2017.

I arrived first thing on Tuesday morning, slide set in hand.
The 40th floor of Trade Tower 7 New York City is just as amazing as it sounds…but as I walked in, I was greeted by a bust of Charles Darwin and some of his hand written letters on the wall.  (as a Catholic, I love the visuals) so I was getting pumped….evolution and Darwin, of course, he’s my brother from another century.

I began working the room and everyone was so surprisingly friendly, it wasn’t difficult. I have been at pharma conferences before and even presented but this one was different.  The presenters had impressively high power positions in innovation (Google, Citi Bank, Pfizer, BCBS, Leo Pharma, BMW. and Second City, along with those who had a new mobile app to share. Everyone wants a shot at healthcare.

The host, Seth Painter, began with a shocking “ice breaker”. He had us stand and hand our phones to someone at our table!  WOW I was impressed. I don’t usually even touch hubby Peter’s phone!  He said “we are all 21st century and we will be texting and checking our messages during all the presentations and that’s OK!  The whole conference was now about DATA: our data and how to harness data into MOBILE.

I was scheduled as the last speaker on Wednesday, the last day of the conference. As the talks began, I readied myself for “talk back”, my hand was up after each presenter, asking what I hope were thoughtful questions.   And for the one talk, I wasn’t sure about; I asked a question I had heard the author Elizabeth Gilbert ask:  “What are you most excited about?”

So, as a teacher, I had worked the class and what began to surprise me was that people were intrigued with my work as a Health Community Leader.  Three of the presenters asked to interview me.

By the time Wednesday afternoon came: I knew the audience!  So as I presented, I could call out their names and my basic goal was to introduce the CysticFibrosis.com community to them, and my work with my business partner Patrick Merel PhD.  We are building an app for CF with the community building a pilot program with 20 Digital Opinion Leaders for 30 days.  We have several mobile digital devices, the piloters will receive for free.  We know our members can be on 31 medications at a time and 6 hours of treatments a day.  Their data is valuable and my proposal is to PAY them for it. Hence to create a new marketplace with genetic / health data.   This was met with surprise, really shock and awe: ”That is capitalism!”,Mike in the back exclaimed!  “People won’t share on facebook, someone else called out and the discussion even got heated.  “Yes, it may actually create jobs 21st century and a new marketplace” I replied someone said “finally, the patient is respected”.

One of the metaphors I used is:  “CF is a Disneyland for researchers…and a data and time sink hole for patients”!

So the long story short…is I made lots of new friends…and hopefully will get a good sponsor for our pilot. They are already getting for free:  an app, a digital spirometer, a high power nebulizer, a kit to work with a lab in British Columbia, a digital scale.

It was clear and unfortunate that most of the innovation in healthcare is happening in Europe (especially Denmark) and Canada.It is a sad state of affairs in the US.

The testimonies and visuals in the slides from the members of my community are memorable.

In the end, I was asked me to join the Panagorapharma Team!

20 September 30, 2022
CysticFibrosis.com is one of the world's largest social media networks dedicated exclusively to the cystic fibrosis community. In addition to the forums, the site contains information on clinical trials, gene therapy, testing, associations, research and events. Read our website disclaimer.

Surviving Through the Pandemic Isolation in Ireland with CF