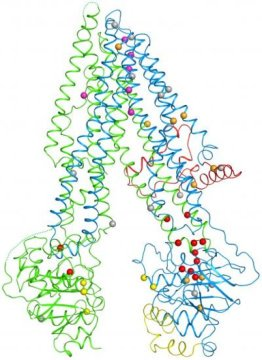 First structural map of the cystic fibrosis protein sheds light on how mutations cause disease. This article highlights this recent discovery in cystic fibrosis genetics.

Scientists from Rockefeller University have created the first three-dimensional map of the protein responsible for cystic fibrosis, an inherited disease for which there is no cure. This achievement offers the kinds of insights essential to better understanding and treating this often-fatal disease, which clogs the lungs with sticky mucus, leading to breathing problems or respiratory infections.

Within the structure, which resembles a clothespin embedded within the cell’s protective membrane, the researchers saw a glimpse of the mechanics by which the channel opens and closes. These included the first glimpse of a mysterious chunk of CFTR, known as the R domain. It sits between the prongs of the clothespin, keeping the channel closed by preventing the normal movement of the prongs.

Within the new structure, Zhang and Chen pinpointed 46 sites that are altered by disease-causing mutations. A striking trend emerged: One half of the channel bore many more of these errors than the other, including one responsible for 70 percent of disease cases. An inspection of the map revealed that this part of the protein contains a weak joint more vulnerable to disruption.

“We think this is a good place to start looking for ways to treat cystic fibrosis at its source,” says Chen, who is also a Howard Hughes Medical Institute investigator. “If I was a biochemist developing drugs, I would look for something that could act a bit like glue to strengthen this weak point within the protein.”

12k November 21, 2015
CysticFibrosis.com is one of the world's largest social media networks dedicated exclusively to the cystic fibrosis community. In addition to the forums, the site contains information on clinical trials, gene therapy, testing, associations, research and events. Read our website disclaimer.