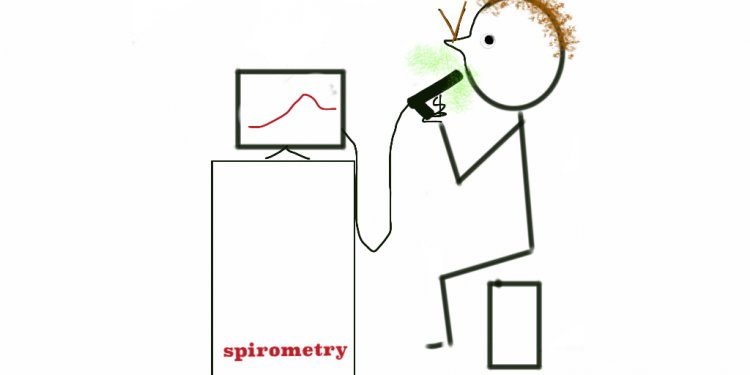 For Cystic Fibrosis, the spirometry test given by the clinic is a very important measurement.

From Wikipedia we learn: “Spirometry (meaning the measuring of breath) is the most common of the pulmonary function tests (PFTs). It measures lung function, specifically the amount (volume) and/or speed (flow) of air that can be inhaled and exhaled. Spirometry is helpful in assessing breathing patterns that identify conditions such as asthma, pulmonary fibrosis, cystic fibrosis, and COPD. It is also helpful as part of a system of health surveillance, in which breathing patterns are measured over time.

Spirometry generates pneumotachographs, which are charts that plot the volume and flow of air coming in and out of the lungs from one inhalation and one exhalation.”

Generally, the patient is asked to take the deepest breath they can, and then exhale into the sensor as hard as possible, for as long as possible, preferably at least 6 seconds. It is sometimes directly followed by a rapid inhalation (inspiration), in particular when assessing possible upper airway obstruction. Sometimes, the test will be preceded by a period of quiet breathing in and out from the sensor (tidal volume), or the rapid breath in (forced inspiratory part) will come before the forced exhalation.

For our upcoming CF app PILOT, 20 patients with Cystic Fibrosis will be testing an app and different mobile measurement devices for 30 days. Each piloter will receive a digital spirometer from NuvoAir for free.

We hear from a mom of one of the piloters:

“With the spirometry, what comes to mind is DS’s inability to fully master pfts during clinic visits. He takes a deep breath, pauses and sometimes doesn’t quite get his lips sealed around it and showers us with spittle. He’s improving, but it depends on who’s administering the tests and their ability or inability to give him advice, tips. So doing this 2-3 times a year he’s having to relearn what to do. Friend of mine mentioned her daughter having similar issues and Max’s doctor has mentioned a couple adult patients never quite getting the hang of it. So when we’re asked by others about his pfts results I can’t ever provide concrete #s, just that he’s improved. Short version of my long spiel here is digital spirometer awesome for those like DS who need to improve upon his pft skills and get an idea how he’s tracking.”